When I was growing up in a small farm town in Southern New Jersey, Thanksgiving was always one of my favorite days of the year.

Of course, there was the sheer natural beauty of seeing the tree leaves change color and carpet the ground with shades of yellow, orange and brown. And all the pumpkins - - each rivaling the next in shape and size - - literally sprouting up from all the local fields.

But, what I remember most about Thanksgiving was the feast - - of football!

My family's holiday ritual began with my Dad and me getting up early and putting on our "uniforms" (layering up with enough clothing to sit outside in the chilly morning air). Because by 8am we were off to attend the annual bragging rights game - - between Millville High School (boo!) and our beloved Vineland High School (yea!) - - which began promptly at 10am every Thanksgiving Day. It was a classic battle between two neighboring towns, pitting the factory mill workers against the farm boys. (I'm not kidding! A glass factory was the major employer of Millville, while the Vineland team was nicknamed the "Poultry Clan" because of all the chicken farms and, believe it or not, our school mascot was a fighting rooster! Imagine the insults we heard every other year when we had to travel to Millville!).

This was more than a mere football game. It was about respecting an ages-old tradition. Every year, I was reminded that the Millville-Vineland game was one of the oldest high school battles in the nation! (By the way, just before writing this, I looked it up for the first time and, sure enough, it began in 1894 and still is the third or fourth longest-running high school football rivalry in the U.S. and, even more remarkable, both schools are about tied in number of wins!).

The Thanksgiving morning game was also a unique social and bonding event for the members of each community, no matter their "status" or place in life. This was particularly true for the home team, as neighbor after neighbor streamed from their houses, most of them walking in groups, to attend this revered event at the local stadium. I remember always struggling to squeeze into the packed bench-style seats (on the Vineland side, of course) and along the way to finding seats, saying hello with my Dad to about everyone we knew in town!

I also remember a few goofy events that occurred over the years at this Thanksgiving football classic. One time, the visiting Millville stands collapsed! (No matter where the game occurred, rickety open wooden stands were reserved for the away team, while the home team sat in the relatively comfortable concrete supported stadium seats.) The Millville fans had been jumping up and down boasting of the success of their boys during the game, much to our dismay, so when they fell to the ground on the Vineland side we thought, "Ha! Ha! You deserved it!" (Actually, I thought that this suspiciously-timed event might have been a result of some unseen mischief by a few leather-jacketed Vineland High dropouts.)

The back and forth mischief between the fans seemed to escalate over the years until it was decided there simply had to be an end put to it! One year, the visiting Millville fans tore down both goalposts after the game and pulled up big chunks of the field too. So the next time the game was played in Vineland, the police brought in the "K-9 Corps" - - and most of the fourth quarter was played with snarling and barking attack dogs leashed to the goal posts in each end zone!

Mostly, though, the game was good, clean fun. But the day was only getting started when the game ended. The next event on the day’s schedule was the annual Thanksgiving parade down the main street of town. (At least my time-filtered memory of Thanksgiving has the parade on that same day - - but it may have been on Friday or Saturday!) Both towns held essentially the same parade. Whichever school was the visitor had its marching band play in the home town's parade, which invariably ended with Santa Claus passing by in his sleigh, tossing to the cheering onlookers (much to the delight of younger kids) miniature candy canes. Then, most of the parade moved on to the other town! I remember how thrilling it was to stand just a few feet away, on the curb, as the local marching bands shook the street with their pounding feet and loud brass horns and drums! (I guess it's no coincidence that my Dad chose to play the lead role of Professor Harold Hill in an off-Broadway production of The Music Man and that I still consider that show, including the song "76 Trombones", one of my favorites to this day!) 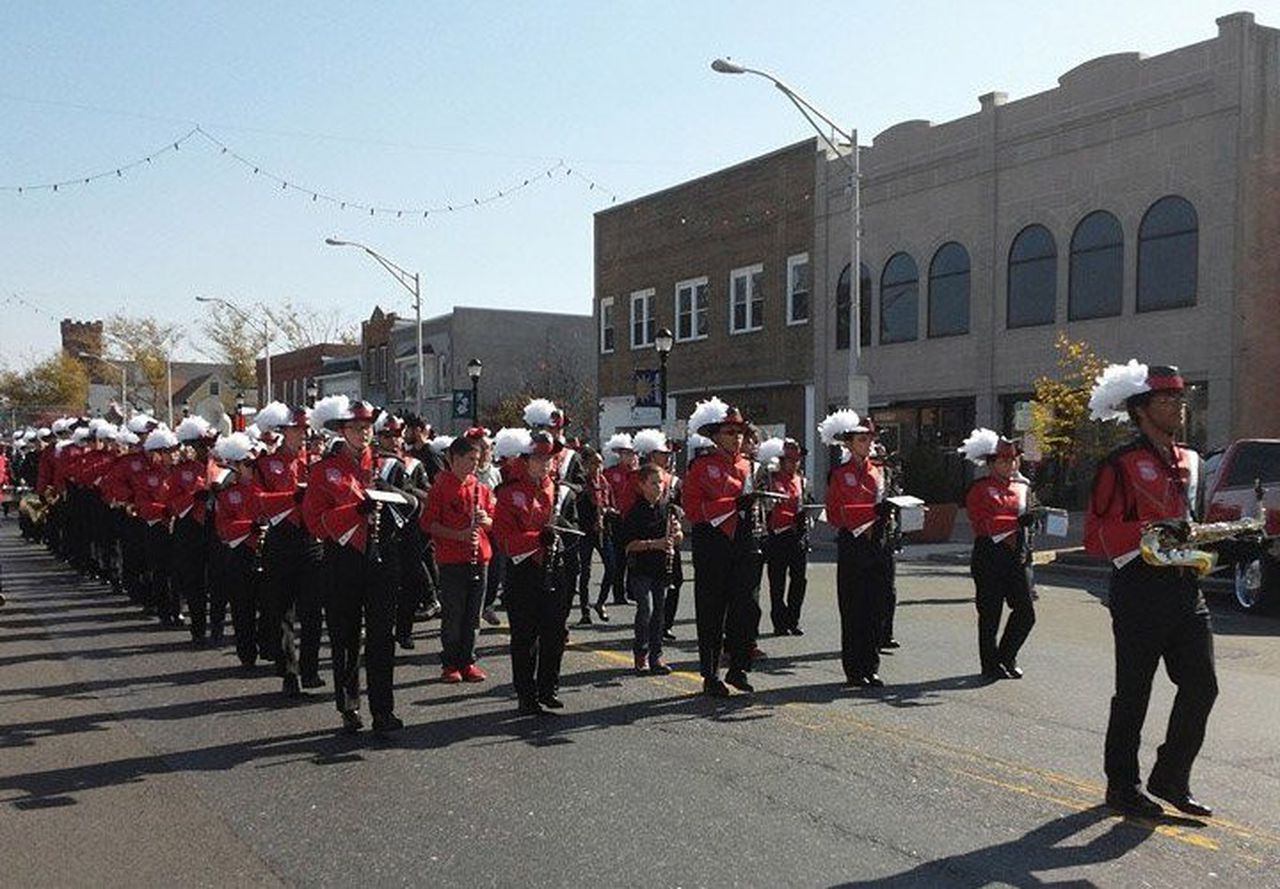 After the game and the parade, the day was still only half over. Next came the early afternoon family Thanksgiving dinners, with plenty of turkey and every other kind of food you can imagine. Then, everyone crowded around the television (a color one, if you were really lucky!) to watch the only NFL game of the day, the Green Bay Packers at the Detroit Lions. (No matter how good the Packers were and how bad the Lions were, I remember it was always an exciting fight to the finish!) During the halftime of that game, the neighborhood Dads and sons gathered in the street or a nearby field for a friendly game of touch football. Then, it was back to the televisions (and more eating until everyone was too sleepy to do anything else!). What a wonderful day Thanksgiving Day was!

For years, until I graduated high school and left our small town to go off to college, I thought (or took for granted) that everyone in America - - and all over the world - - enjoyed a Thanksgiving holiday like this. Of course, I soon learned nothing was farther from the truth. It was only after breaking away from the wonderful Thanksgiving tradition of my youth that I truly understood the meaning of Thanksgiving. We are so very lucky and truly blessed to live in such a free country and enjoy all its opportunities and bounty.

I know many people are experiencing hard times these days and I believe it's not just the obligation, but the duty, of those of us who are well off to help others less fortunate. Give of your time to assist others in need or of your spare money to contribute to worthy charitable causes. Consider placing a special bequest in your estate plan to charity, even if it's just 1% of what you've accumulated over a lifetime! Your family will hardly miss that 1%, but imagine what good it will do in the world, particularly when others join you to do the same.

by Philip J. Kavesh
Nationally recognized attorney helping clients with customized estate planning guidance for over 40 years.
1 Comments
Phil, it is always a pleasure to read your monthly message. I enjoyed your small town tale of the Thanksgiving traditions where you grew up. We thank God on this day for feast, family, and our national heritage.
by Denise Nolan Delurgio October 31, 2021 at 02:16 PM
Post a Comment
Register And Attend An In Person Seminar And Receive A Special Fee Discount Click Here