When you are writing your last will and testament, clarity is important. Since a will only takes legal effect after a person dies, the words may be left open to interpretation. Any error—great or small—has the potential to change not only how a will is read but how an estate’s assets are later distributed. Even though California’s probate code defines a set procedure for dispute resolution, an ambiguous will can still create unforeseen problems. 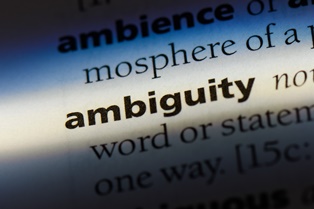 What Makes a Will Ambiguous

A will may be ambiguous for any number of reasons. The original writer—or testator—may have tried to list their last wishes without an attorney’s assistance, making mistakes in the process. Or the will may have been written years earlier and references legal arrangements or statutes which have long since changed.

In general, however, there are three categories of ambiguity and error which often cause wills to be challenged:

An ambiguity which is obvious and arises from the will’s language. A will with patent ambiguities might designate an heir but fail to explain exactly which assets they should receive.

An ambiguity which arises from uncertain circumstances. There are two types of latent ambiguity. The first is equivocation, which occurs when the wording of a will may apply to more than one object or entity. The second is misdescription, which occurs when part of a description is incorrect. A testator might, for instance, misspell the name of an intended heir or list the wrong address for a real property.

An error which was made when the will was being written. A scrivener’s error can be as simple as a misspelled or omitted word. However, such basic mistakes still have the potential to change the meaning of a will and lead to a probate challenge.

If a will is challenged, or a California probate court believes it is clearly ambiguous, a prospective heir and their attorney should be prepared to show evidence demonstrating the testator’s original intent.

A beneficiary might, for instance, show a judge a letter in which the testator referred to them by an abbreviated name or nickname—thereby clearing up any claims of misdescription.

In some instances, extrinsic evidence may be used to refute estate claims. If a disinherited child protests their removal from a will or trust, extrinsic evidence—such as an affidavit or other statement—may prove that the omission was intentional.

Even Unambiguous Wills Can Be Re-Interpreted

Those who write a will usually do so with the intent to be clear. However, even unambiguous documents can present unexpected challenges. Up until very recently, many California courts adhered to the “four corners” rule—if a will appeared valid, nothing outside the paper’s borders would be considered in probate.

However, the California Supreme Court weighed in on the Estate of Duke—an estate challenged by two of the testator’s preferred charities as well as by his other heirs—and acknowledged the importance of intent on the part of the testator. Under the Estate of Duke, “an unambiguous will may be reformed if clear and convincing evidence establishes that the will contains a mistake in the expression of the testator’s intent at the time the will was drafted and also establishes the testator’s actual specific intent at the time the will was drafted.” Duke’s estate was forced through California’s judicial system, where the Supreme Court eventually sided with the charities on the basis of extrinsic evidence.

How an Attorney Can Help

An ambiguous will, as well as the introduction of extrinsic evidence, can significantly alter the outcome of probate proceedings. An experienced estate planning attorney can help stake your claim—and back it up.

Do You Need The Help Of A Trust & Estate Administration Attorney In California?

If you need legal help with an estate or trust issue you should speak with an experienced trust and estate administration attorney as soon as possible. Contact us online or call our office directly at 800.756.5596 to claim your space at one of our free, informative seminars. Your attendance will qualify you for a discount for our estate and trust administration services. We proudly serve clients throughout California with offices in Torrance, Newport Beach, Orange, Woodland Hills and Pasadena.

Why You Should Review Your Estate PlanRequest Information

Excellent Living Trust and Will review with Peter Keon. I learned a lot more on both my Living trust and Will and I know how I will proceed for my updates. Thank you very much for providing the time to discuss and answer my questions and concerns. Gerald B.
I highly recommend Kavesh, Minor & Otis to anyone who wants to create a living trust or have a living trust that may need updating. Tracy Wilson
Jane Lee provided important specific information for my 3-year Free Trust Review! I feel confident that my trust is up-to-date and appreciate Jane’s knowledge and personable guidance. Thank you! G. Kaneshiro
They helped me put my Dad's estate in order, after his death. I recommend them for trust and estate planning. Jess Caldejon
“My father passed away in February of 2008, and I can only tell you that I was and am so thankful for the trust document he had your firm do. I couldn’t have gotten through all of this without the expert guidance of your firm.” Corinne L.